A Visit to the Deep South: Louisiana Sugar Plantation,Oak Alley 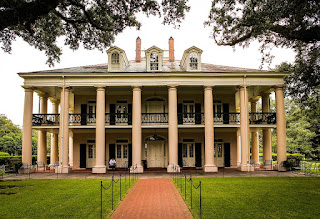 The main house was built for the Roman owners from 1837 to 1839 and took nearly three years to complete. It was a gift from Jacques Telesphore Roman to his bride Celina, although it is rumored to have been designed by Celina's own father, Gilbert Joseph Pilie. Constructed mainly by slave labor, the building materials were mostly found on the plantation grounds, although finishing touches were imported from other places in the United States and Europe-most likely France at the time. It was for Celina that the back oak alley was planted so that she would feel that her new country life on the plantation could be just as grand as what she was used to from living in her father's house in New Orleans.

...
Read the full article here!
Posted by Jenn at 2:25 PM No comments: Links to this post

A Visit to the Deep South:
Louisiana Sugar Plantation, Oak Alley
Grounds and Farm (article 1 of 3)
Sugar cane was a major income for the plantation, though the grounds were not very extensive compared to larger plantations up and down the Mississippi River. If you look around on your drive up to the plantation you can still see fields of sugar cane today, the wet Mississippi area is perfect for the crop.

Posted by Jenn at 9:27 AM No comments: Links to this post

Slavery on Oak Alley Plantation was seen as some of the most arduous enslavement conditions, although not because of the owners, but because of the location and type of plantation. Louisiana summers could get dangerously hot during the days, and would never really cool down during the nights. Heat stroke and dehydration were common, although they were watched for and treated. Winters weren't any better, with the arctic winds blowing straight down the plains of central United States and the humidity coming off the Mississippi river in the plantation's backyard. Freezes were common, and the long life cycle of sugar cane brought the planting and harvesting times into the late, and early, portions of the seasons.


In addition to the unforgiving environment, the harvest itself was labor intensive. Unlike the crops of cotton or tobacco, sugar cane had to be watched constantly. The plant grows very shallow roots and any amount of rain or wind could destroy most of the crop. When it comes time to harvest, there is no simple picking of the fruit; all of the plant needs to be cut down, the long slender leaves must be cut off and down the stalk and the stalk itself must be chopped into manageable pieces.


After the sugar crop has been harvested it still needed to be boiled down into molasses, a process that involves several very large metal vats, ladles the size of pool skimmers and barrels that weigh 1200 pounds on average.


Jacques Roman had the original slave quarters built close to the main house, and therefore close to the other amenities such as the kitchen and the outhouses. In addition to the set of slaves that he had at the time of his marriage to Celina and the building of the plantation, he also purchased his mother's slaves upon her death. Jacques and two other siblings fought over what was to be done with the slaves after their mother's death. Victorin argued that their mother did not want the slave families split up, but Sothsene stated that since she did not put that in her will exactly that they should sell them individually for the greater profit. Jacques, having a new plantation to stock, bought them all at auction and kept the entire lot together.


This family style approach to slavery was carried over from the economic advantages of owning several plantations that bordered each other up and down the Mississippi river. What could be borrowed and traded between the family plantations saved the family money.


Slaves frequently traveled between the family plantations, relaying goods and communication. Several of the slaves were godparents to children from different plantations, and so forth, hinting at the intermingling of the family estates, economies and communities.

Posted by Jenn at 4:20 AM No comments: Links to this post